As part of its year-long 50th anniversary celebration, CAPA will offer a free open house walking tour of the Ohio, Southern, and Palace Theatres on Saturday, July 13, from 1-4 pm. The three historical, downtown theatres are owned and operated by CAPA, and will be open for self-guided tours that include access to their stages to take photos with the theatre as a backdrop. Local docents will be scattered throughout, offering historical information and interesting, and perhaps lesser known, facts about each venue.

CAPA presents the CAPA Theatres Free Open House Walking Tour on Saturday, July 13, from 1-4 pm. Self-guided tours do include stairs. Rain or shine event. Large bags/backpacks are prohibited. No reservations required. Participants can begin the tour at any of the three venues in any order. Enter each theatre beneath the marquee. Admission is free.

CAPA’s 50th anniversary celebration is made possible through the generous support of the American Electric Power Foundation and Nationwide, with special support provided by Huntington Bank.

Participants are encouraged to pick up a tour program and have it stamped at each of the three tour stops. Those who collect all three stamps can receive a free pair of tickets to the 2019 CAPA Summer Movie Series by showing their program at the CAPA Ticket Center (39 E. State St.) before 4pm on Saturday, July 13, or during the Ticket Center’s regular business hours the following week, July 15-20. The two free tickets are good for any remaining screening on the 2019 CAPA Summer Movie Series that runs through Sunday, August 11, at the Ohio Theatre.

About the Ohio Theatre (39 E. State St.)
When Robert Karlsberger, Lawrence Fisher, Jean Whallon, and Scott Whitlock formed CAPA on May 21, 1969, its immediate mission was to save the historic and stunning Loew's Ohio Theatre from being destroyed. The 1928 Spanish Baroque-style movie house, designed by architect Thomas Lamb as “a palace for the average man,” was closed by Loew’s on February 24, 1969, and sold to a local development company with plans to raze it, and the adjacent RKO Grand Theatre, to build an office tower. The newly formed non-profit leapt to rally the community in a “Save the Ohio” campaign that ultimately raised more than $2 million in less than a year. The unprecedented effort met its mark, and the glorious and beloved Ohio Theatre was safe. Today, the Ohio Theatre is proudly listed on the National Register of Historic Places, been declared a National Historic Landmark, and is the State Theatre of Ohio.

About the Southern Theatre (21 E. Main St.)
In 1986, the Southern Theatre was donated to CAPA. The 1896 jewel box opera house had closed in 1979 and needed extensive repair. CAPA again rallied the community and raised $10 million to fund a 14-month, total restoration. Reopened in 1998, the thriving Southern Theatre is Columbus’ oldest existing theatre and listed on the National Register of Historic Places.

About the Palace Theatre (34 W. Broad St.)
In 1989, Katherine LeVeque gifted CAPA the Palace Theatre, a 1926 vaudeville house (also designed by Thomas Lamb) with an interior design inspired by France’s magnificent Palais de Versailles. CAPA immediately assumed responsibility of the venue’s care and management, and in 2018, completed a $6 million renovation that included the installation of a high-efficiency heating system, a new roof, and a full facelift of its magnificent auditorium. 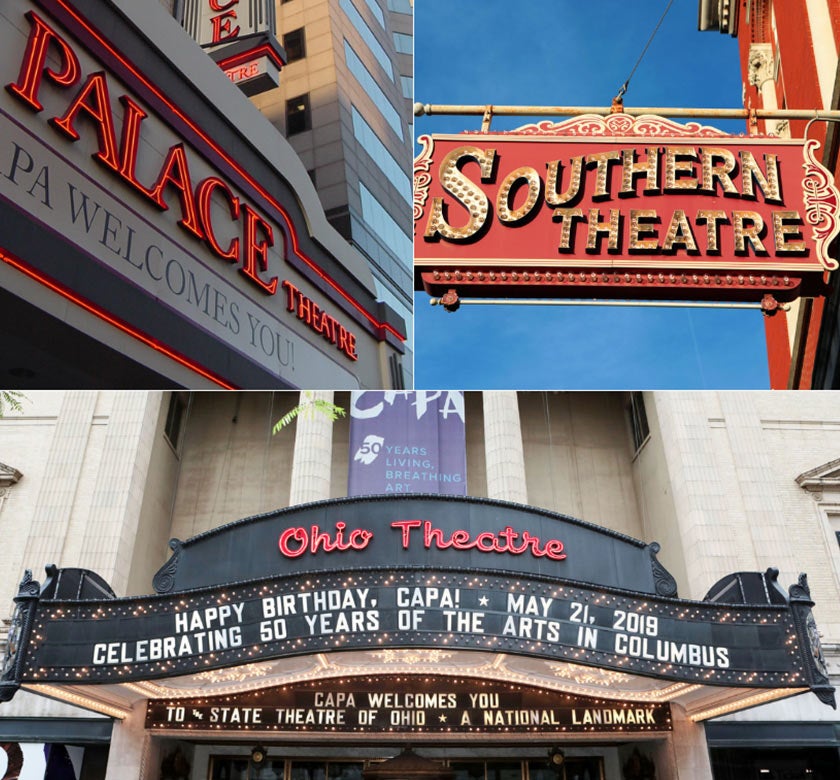