GRAMMY®-nominated saxophonist Dave Koz is bringing the music of the high seas to armchair travelers everywhere. Although the next voyages of Dave Koz & Friends at Sea don’t set sail until May 2022, Koz is bringing some of his favorite cruise artists together on Sunday, April 18, for "Cruisin' On A Sunday Afternoon," a special livestream concert on Looped.

“With more and more people getting vaccinated and communities opening up, it seems there’s a real optimism out there now, and we wanted to be a part of all this renewed excitement,” stated Koz. “You don’t even have to leave your couch to enjoy these amazing artists, all veterans of our musical weeks at sea. It’s gonna be a blast!”

CAPA presents Dave Koz’s “Cruisin’ on a Sunday Afternoon” Livestream Concert on Sunday, April 18, at 5 pm. Virtual tickets to this online concert are $25 and can be purchased at www.capa.com. One ticket per device. The ticket price includes a digital copy of Koz’s 2019 album, Live from the Dave Koz Cruise.

This virtual event is the latest in a series of hugely successful, themed livestream concerts presented by Koz which have included the 2021 Valentine’s Day weekend “A Romantic Night In,” Dave Koz & Friends The Greatest Hits of Christmas 2020, and his fall 2020 album release party livestream for A New Day.

About Keiko Matsui
Acclaimed pianist, composer, and humanitarian Keiko Matsui's transcendent and haunting melodies have long sought to build bridges. Her sonic cultural exchange has reached the hearts and minds of fans throughout the world and has allowed the pianist to work alongside icons Miles Davis, Stevie Wonder, Hugh Masekela, and Bob James. “I would like my music to be a conduit for peace, kindness, love and light,” shares the petite, soft-spoken, yet commanding pianist. She adds, “My recording Echo is my attempt to capture all of these elements into the vibration of sound.”

About Vincent Ingala
One of the fastest-emerging, contemporary jazz recording artists in recent history, multi-instrumentalist, composer, and producer Vincent Ingala has blasted into an exciting stratosphere of his own making since his 2010 critically acclaimed debut album, North End Soul. Still in his twenties, the charismatic saxophonist has been named Billboard Smooth Jazz Artist of the Year in 2012, Sirius XM Watercolors Breakthrough Artist of the Year in 2013, and his music is consistently found atop the most noteworthy music charts in the world, including six number one hits on the Billboard Smooth Jazz Chart, and 18 singles in the Billboard Smooth Jazz Top 10.

​​About Chris Walker
Chris Walker’s first release, First Time, produced two top-five singles, “Giving You All My Love” and “Take Time,” the latter of which crossed over to become top 30 on the pop charts. His second release, Sincerely Yours, included the classic song, “How Do You Heal a Broken Heart” written by Chris and Carole Bayer Sager which received more than 60 million views on YouTube. He served as Al Jarreau’s musical director, bassist, and co-vocalist for more than 20 years. In 2019, he released his homage to Jarreau, We’re in This Love Together – Celebrating Al Jarreau, which continues to receive rave reviews from both critics and fans alike. 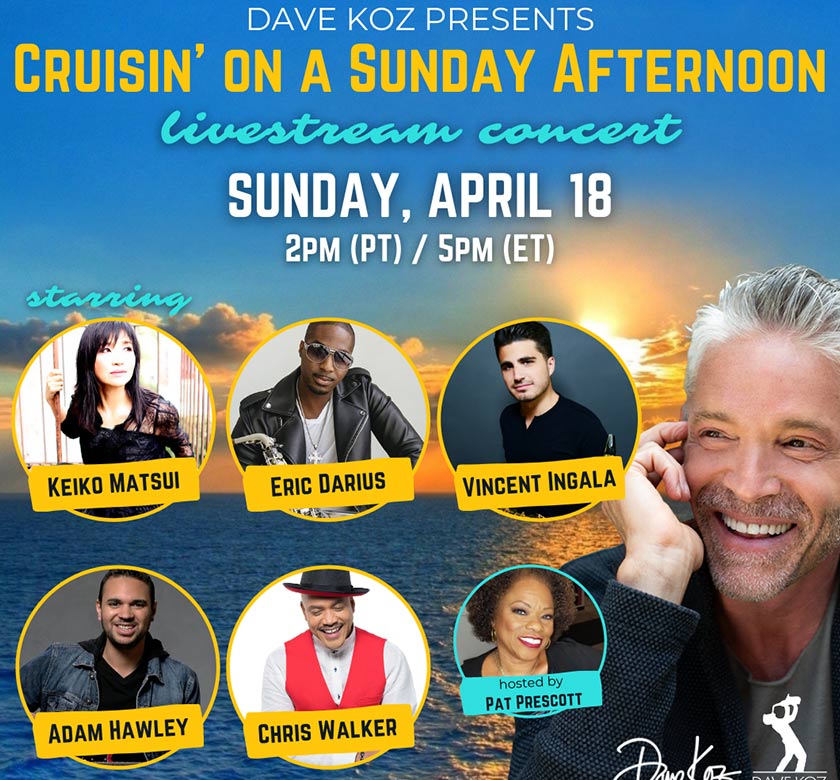