Zakir Hussain, Kala Ramnath, and Jayanthi Kumaresh have come together for the first time as leading Indian classical exponents of their respective instruments—tabla, violin, and Saraswati veena—for the Triveni tour. Triveni is the mythical site of the union of three sacred rivers in India, and the name aptly represents the confluence of the varied musicality the three maestros bring to this collaboration. With Kala Ramnath representing the North Indian raga tradition, Jayanthi Kumaresh the ancient South Indian veena, and Zakir Hussain seamlessly stitching North and South Indian rhythm traditions, Triveni promises to be a fluent, joyous, and entirely original musical conversation and sonic experience of the highest order.

About Zakir Hussain
The pre-eminent classical tabla virtuoso of our time, Zakir Hussain is appreciated as one of the world’s most esteemed and influential musicians, one whose mastery of his percussion instrument has taken it to a new level transcending cultures and national borders. Along with his legendary father and teacher, Ustad Allarakha, he has elevated the status of the tabla both in India and around the world.

In 1991, Planet Drum, an album co-created and produced with Mickey Hart, became the first recording to win a Grammy Award in the Best World Music category and the Downbeat Critics’ Poll for Best World Beat Album.

He is the recipient of countless awards, including two Grammys, Padma Bhushan, Padma Shri, and Officier in France’s Order of Arts and Letters. Voted “Best Percussionist” by both the Downbeat Critics’ Poll and Modern Drummer’s Reader’s Poll over several years, Hussain was honored with SFJazz’s Lifetime Achievement Award at their 2017 Gala for his “unparalleled contribution to the world of music.”

About Kala Ramnath
Maestro Kala Ramnath with her “singing violin” stands among the world’s finest, most inspirational instrumentalists. She has been featured on the Grammy-nominated Miles from India project, and her compositions have appeared in the Grammy-winning album 27 Pieces and the Kronos Quartet’s 50 for the Future. Most significantly in an Indian context, in 2017, Ramnath was awarded the most illustrious Sangeet Natak Academy Puraskar for her contributions to the violin in Hindustani classical music.

Acknowledged as a virtuoso of staggering proportions, Ramnath has performed at the most prestigious music festivals in India. She has appeared on world stages including the Sydney Opera House, Paris’s Théâtre de la Ville, London’s Queen Elizabeth Hall, San Francisco’s Palace of Fine Arts, Singapore’s Esplanade, New York’s Carnegie Hall, the Rudolstadt Festival in Germany, and the Edinburgh Music Festival in Scotland. She has also performed and experimented with such orchestras as the London Symphony and the London Philharmonic, and such musical legends as George Brooks, Kai Eckhardt, Béla Fleck and Edgar Meyer, Terry Bozzio, Giovanni Hidalgo, Ustad Zakir Hussain, Abbos Kosimov, and Ray Manzarek of The Doors.

About Jayanth Kumaresh
With her mesmerizing glides, the timing and purity of her notes, and her soulful playing, Dr. Jayanthi Kumaresh has been captivating audiences around the world for 30 years and is one of the leading Veena (roughly, the Indian lute) artists today.

Kumaresh has been awarded the Sangeetha Choodamani, the Kalaimamani from the Government of Tamil Nadu, the Veena Naada Mani, the Kala Ratna, the Sathyashree, and the Gaana Varidhi to name a few. She is a seven-time recipient of The Music Academy, Chennai’s Award for Veena. 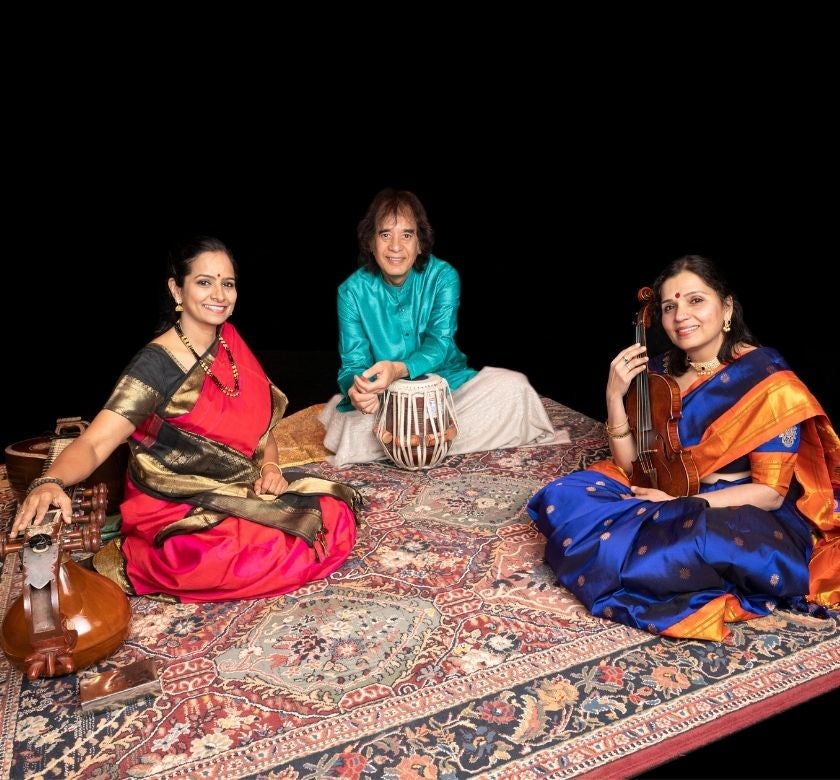