Dave Koz and Brian McKnight Announce "A Romantic Night In"

GRAMMY®-nominated saxophonist Dave Koz and R&B superstar vocalist Brian McKnight have announced “A Romantic Night In,” a one-night-only, livestream concert that will take place on Valentine’s Day Eve, Saturday, February 13, via Looped. They will be joined by special guest Sheléa.

““Brian, Sheléa, and I are so excited to provide the romantic soundtrack to your Valentine’s weekend celebration at home,” stated Dave Koz. “Pour a glass of wine, dip some strawberries in chocolate, and leave it to us to provide the musical magic!”

CAPA presents “A Romantic Night In” with Dave Koz, Brian McNight, and special guest Sheléa on Saturday, February 13, at 8 pm. Virtual tickets to this online concert are $35 and will include an exclusive digital copy of the “A Romantic Night In” EP, a collection of Koz’s most romantic songs.

VIP experiences, including exclusive one-on-one meet and greets, are also available. A portion of the proceeds will go to the Starlight Children’s Foundation, an organization dedicated to delivering happiness to seriously ill children and their families.

Tickets are on sale now and can be purchased at www.capa.com. One ticket per device.

This virtual event comes on the heels of Koz’s hugely successful 2020 livestream concerts. The first celebrated the release of his latest album, A New Day, while the second, Dave Koz & Friends The Greatest Hits of Christmas 2020, featured Koz and an all-star lineup of guests performing holiday favorites.

About Brian McKnight
McKnight has released 15 albums to date, selling more than 25 million albums worldwide and earning 16 GRAMMY® nominations. In addition to being a singer, songwriter, and producer, he is a multi-instrumentalist who plays nine instruments. His many hits include “Love Is,” “One Last Cry,” “You Should Be Mine (Don’t Waste Your Time),” “Find Myself in You,” and “Used to Be My Girl.”

About Sheléa
Singer, songwriter, musician, producer, and actress Sheléa blends traditional pop, jazz, R&B, and soul, bringing a contemporary edge to classics and a classic touch to contemporary pop standards. With years of making a name for herself as a vocal powerhouse, having performed at the White House (twice), Library of Congress, Carnegie Hall, Kennedy Center, and more, 2020 marked her acting debut as Dorinda Clark in “The Clark Sisters: The First Ladies of Gospel,” a Lifetime biopic that drew 2.7 million viewers. 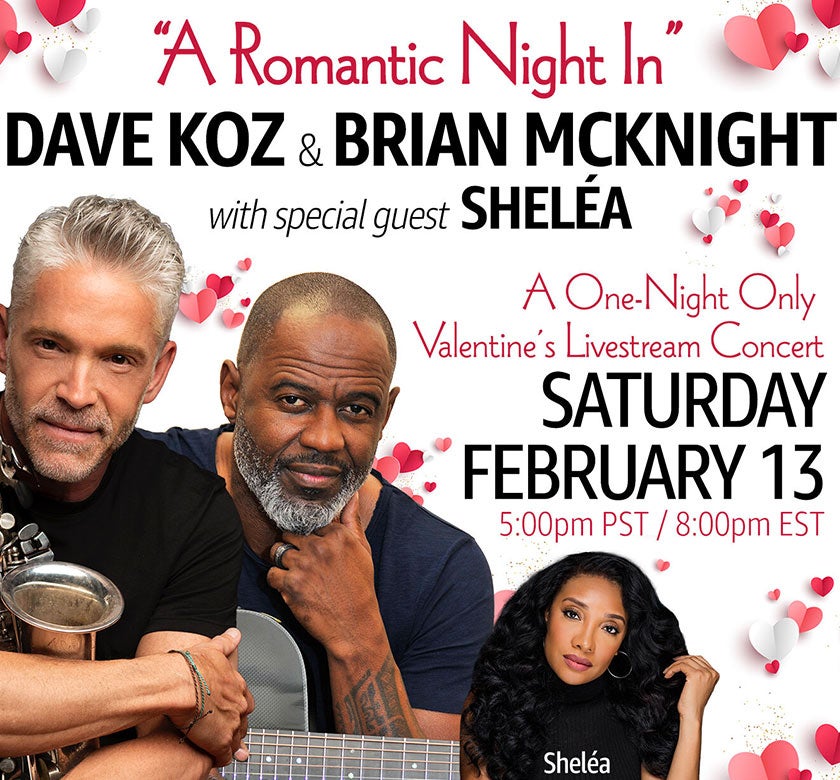 A Romantic Night In