Having been dubbed “an amazing ride” by the New York Times, the mind-boggling performances of The Mayhem Poets have been described as, “The Simpsons meets Malcolm X at a Notorious B.I.G. concert.” These theatre-trained, comedically gifted lyrical virtuosos seamlessly blend raw elements of hip-hop, theatre, improv, and standup comedy to tell gut-wrenching truths that leave audiences forever changed.

CAPA presents The Mayhem Poets at the Lincoln Theatre (769 E. Long St.) on Tuesday, April 26, at 7:30 pm. This is a free event, but an online ticket reservation is required at www.capa.com/mayhem.

Poets aged 13-22 are invited to display their talents and share their work as the opening act for The Mayhem Poets. Beginning at 6pm, poets may sign up at the Lincoln Theatre for the pre-show open mic event sponsored by The Huntington National Bank. Those who are selected through a random drawing will take the stage prior to The Mayhem Poets and share an original poem. After each selected poet performs, The Mayhem Poets will respond and share some constructive advice. At the end, all youth poets that entered the drawing will be asked on stage to share one original line on the topic of “a world without injustice,” creating a collective, shared poem.

This event is made free to the public through the generous support of The Huntington National Bank, The Robert Weiler Company, and PNC Bank. Season support has also been provided by The Columbus Foundation, Greater Columbus Arts Council, Nationwide Foundation, and The Ohio Arts Council.

The Mayhem Poets’ unique approach to spoken word has landed them feature spots on “The Today Show” and “Eyewitness News” after winning first place and a grant for the 2006 Microsoft Idea Wins Challenge. Since then, they’ve been touring internationally and spreading their mission to reshape society’s view of poetry.

About poet and co-founder Scottt Raven
A graduate of Rutgers University with a double degree in theater and journalism, Scottt Raven co-founded The Mayhem Poets. His performance work has been featured by Fiat, Purina, CNN, and “The Today Show.” His written work has appeared in the New York Times and New York Post. He is the author of Sconnettts, a collection of Shakespearean sonnets based on his past romantic relationships, and the upcoming “6 Piece Chicken,” performable poems and stories from on tour. He’s also a proud member of the Spoken Word Almanac Project and Poetic Poeople Power. Raven grew up in New Jersey and currently lives in New York City where he runs and puns with his almost wife and imaginary man’s best friend, Spott.

About poet Mason Granger
Originally from Philadelphia, raised in Willingboro, and currently living in Queens (NYC), Mason Granger has been a full-time member of The Mayhem Poets since 2005. With a style that’s equal parts smart and smile, Granger gets his points across in a way that leaves audiences a little more knowledgeable and feeling a little better than when they arrived. He is also the creator of SlamFind, the world’s first mobile app dedicated to performance poetry that allows poetry fans to discover and connect with live poetry venues and individual poets all over North America. SlamFind poetry videos have been featured by The Huffington Post, Upworthy, Buzzfeed, Cosmo, and many more. Granger has been featured in Vibe, Complex, Fader, and Rolling Stone as a spokesperson for New Era Caps.

About poet Mikumari Caiyhe
Mikumari Caiyhe is an established actor, emcee, spoken word poet, and arts educator. A native of Washington, DC, Caiyhe graduated from the distinguished Duke Ellington School for the Arts with a focus in theatre. He completed his formal education at Mason Gross School of the Arts at Rutgers University as an acting major. As an artist, Caiyhe has toured internationally, including the lead role in the musical Revelations (God/MC). In the same year, he was one of the first emcees/rappers to do a hip-hop concert at Shakespeare’s Globe, and also a member of NYC’s Nuyorican Poets Cafe 2013 competitive poetry team. As an educator and arts advocate, Caiyhe is independently contracted by the New Jersey Performing Arts Center, the Boys and Girls Club of America, and the YMCA to facilitate art residencies and workshops teaching literary arts, acting, and ballroom dance. His mission is to use art to liberate individuals from fear, emancipate and empower the light within, and illuminate forever.

About poet and co-founder Kyle Rapps
Kyle Rapps is co-founder and producer of Mayhem Poets. His hip-hop styles and theatrical presence have earned him poetry slam victories across the nation, and brought him all the way to the Grand Slam finals at the legendary Nuyorican Poets Cafe in New York City. As a rapper, Kyle has recorded with the likes of Action Bronson, Talib Kweli, KRS-One and Joell Ortiz. After touring for over 10 years with the group, Kyle recently moved to Mexico City to spread the Mayhem Poets message across the border. 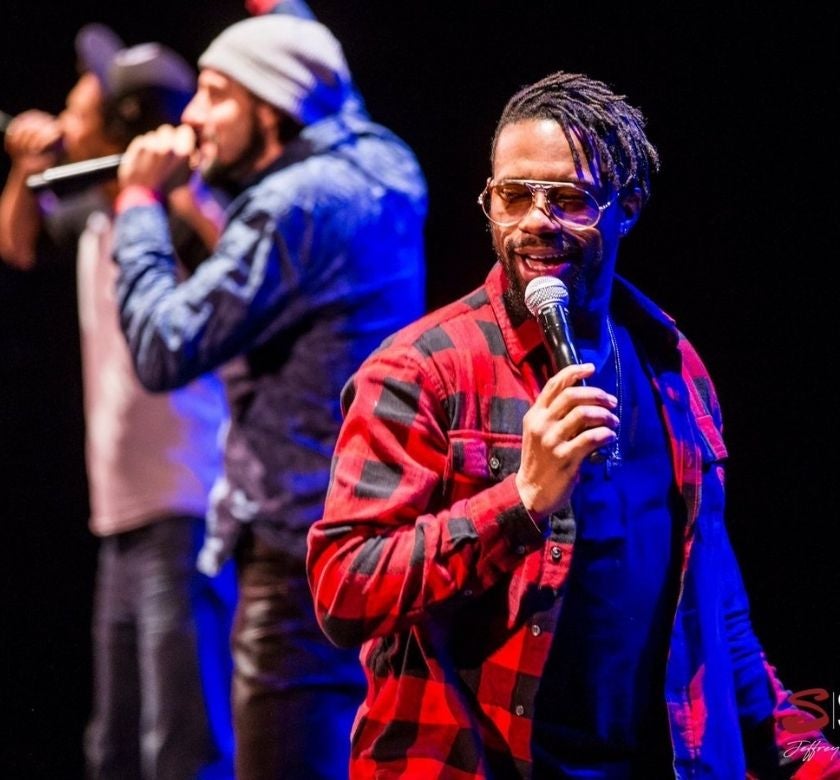